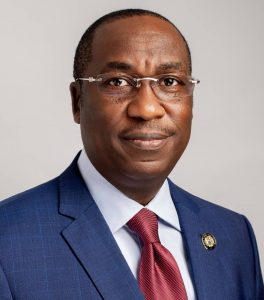 Dr. Kadri Obafemi Hamzat was born on September 19th 1964 in Lagos to Late Oba Mufutau Olatunji Hamzat, Olu of Afowowa Sogaade. His mother is late Alhaja Kehinde Hamzat, who is from Iga Egbe in Lagos Island.

Dr. Hamzat attended Odu Abore Memorial Primary School, Mushin, Lagos State and Olivet Baptist High School, Oyo State in the southwest region of Nigeria. He proceeded to the University of Ibadan where he graduated with a B.Sc. in Agricultural Engineering (1986) and a Masters in Agricultural Engineering (1988). In 1992, he graduated from Cranfield University, England with a Ph.D in System Process Engineering, becoming the first student in the department to complete his doctorate within three years. He is also an alumnus of the Harvard Kennedy School Executive Education Programme.

An accomplished academic and a technocrat of proven ability, Dr. Hamzat’s career has seen him work in both the private and public sector with experience in organizations such as RTP Consulting Services, City of New York, Columbia University, Merrill Lynch Inc, Morgan Stanley and Oando Plc., as Chief Information Officer (CIO) and Group Head, IT Strategy of Oando Plc, Lagos.

Dr. Kadri Obafemi Hamzat, whose arrival into the public service from an illustrious private sector career, was announced by his appointment as Commissioner for Science and Technology during the tenure of Asiwaju Bola Ahmed Tinubu in August 2005. Retaining him as Commissioner for Science and Technology when Governor Babatunde Fashola assumed office in 2007 was natural because because of his comprehensive rollout plan of designed initiatives that permanently changed the face of data and record keeping in the State. Within the administration, he introduced and championed the automation of government processes. This helped change and improve the way public servants carry out their operations in the State, as well as eradicate State ghost workers through the implementation of enterprise resource planning.

In 2011, Dr Hamzat was appointed Lagos State Commissioner for Works and Infrastructure; a position he held till May 2015. When he was the Commissioner he was responsible for many civil and construction works in the State. His notable achievements are but not limited to; the completion of the Lekki-Ikoyi Bridge linking Admiralty Way to Bourdillon Road, Nigeria’s first cable-stayed bridge and the construction of the Lekki Expressway with the upgrade, expansion and maintenance of approximately 50km of the Lekki-Epe Expressway (Phase I), and construction of Yaya Abatan road, Cemetry Road in Ajeromi Ifelodun, Expansion of Lagos Badagry expressway with a rail (blue line) and other infrastructures across the State.

For his extraordinary performance and technical abilities, Babatunde Raji Fashola, Minister for Power, Works and Housing appointed him as his Special Adviser Technical.

In this advisory role, which he occupied from January 2016 to August 2018, Hamzat was Adviser to the Honourable Minister on roads and other infrastructure assets. In addition to this, he also served as Consultants to Ministries, Departments and Agencies (MDAs) on public infrastructure such as Architectural designs, Structural designs, Quantity surveying, Mechanical and Engineering devices.

His forte also extended to Quality control of Civil Engineering and Building Projects, Planning, Designing and Implementation of Infrastructure Programme as well as Rehabilitation and Maintenance of Roads & Bridges and Research & Development.

In October 2018, Mr. Babajide Sanwo-Olu, the candidate of the All Progressives Congress (APC), picked Dr. Kadri Obafemi Hamzat, as his running mate for the Lagos governorship election in 2019. As a team, they had a resounding victory at the polls.

Dr. Hamzat is a family-centered man, whose marriage to Oluremi Hamzat is blessed with lovely children.