The Governor gave the assurance on Friday while speaking at the Ernst and Young (EY) Entrepreneur of the Year (West Africa) Award and Gala Night held at the Eko Hotels, Victoria Island, Lagos to acknowledge and honour the excellent Nigerian spirit of entrepreneurship.

Sanwo-Olu, who was represented at the event by his Deputy, Dr. Kadri Obafemi Hamzat, acknowledged that entrepreneurs are the key drivers of the economy of the State and the nation.

He noted that Lagos would not have attained the enviable status of being the economic hub of Nigeria and the biggest sub-national economy of Africa, if not for the entrepreneurs who translated their dreams into reality.

According to the Governor, “Anyone who has started a business knows that it is not an easy thing to do. It also does not get easier and every stage of the growth of a business comes with its own unique challenges and issues”.

“We must also acknowledge that our environment can be a challenging one for various reasons. But, in spite of all the obstacles and challenges, many people continue to put in the hard work and the sacrifice, to build, to grow, to expand and to innovate”.

“Lagos State will, therefore, continue to faithfully discharge its responsibility to create an enabling environment for your businesses. Our doors are always open for your ideas, feedback and complaints”, he said.

Speaking further, Sanwo-Olu asserted that Lagos is investing heavily in infrastructure, especially in the transport sector and is also receiving support from the Federal government in major areas of transport, power and agriculture.

While noting that there can never be safety of lives and property without security, the Governor reaffirmed that security remains a priority of his government and identified the private sector as an vital partner providing support through the Lagos State Security Trust Fund.

The Governor maintained that his administration will continue to fine-tune processes of transacting business with government in areas such as obtaining land titles and related documents as well payment of taxes by automating its services for greater efficiency and transparency.

In his welcome address, the Regional Managing Partner, EY Entrepreneur, Mr. Henry Ogbebi disclosed that innovators and entrepreneurs make a positive impact on the people and socio-economic development, just as he called for collaboration between entrepreneurs and government to create value for the people.

He stated that the EY Entrepreneur Award started in the United States in 1986 and had since become a global programme covering more than 70 countries, adding that the West African edition of the award commenced in 2011.

A high point of the event was the presentation of awards to distinguished entrepreneurs and captains of industry for their excellence, spirit of entrepreneurship and creation of value for the nation’s economy.

Those honoured include Founder/Chief Executive Officer, Coscharis Group, Dr. Cosmos Maduka, who emerged winner in the Masters’ category and would be representing Nigeria in the EY Entrepreneur Award of the Year in Monte Carlo; Managing Director/CEO, Beloxxi Industries Limited, Mr. Obi Ezeude, Winner, EY Entrepreneur of the Year, while the Lifetime Achievement Award went to the doyen of banking in Nigeria and Africa, Dr. Olasubomi Balogun. 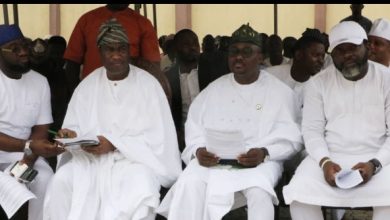